A Message Against Fascism 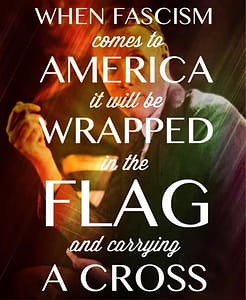 We are in a time when the disease of Fascism is yet again attempting rise in our world. Not just in Europe where it existed, but most noticeably in America with a rise in White Supremacy and Neo-Nazi organizations coming into the open over the last 5 years, and culminating in the wake of the presidency of Donald Trump into the riots at the Capitol on January 6th, 2021. In an attempt to overthrow our democracy over false claims of a “fraudulent election” promoted in conspiracy circles across the Alt-Right, this underground movement has also given rise to what is known as QAnon, a fringe conspiracy movement steeped in white supremacist propaganda. History has shown before, as it shall show again that Fascism must, and always will fall. Wherever it goes it is inevitably met with resistance and defeat. It fell in Europe at the hands of Russia and Communism, and it shall inevitably fall again.

The issue is not can we defeat it, the question is would our Government permit it to die, or would they permit it to seek safe harbor as we did at the end of World War 2 in what is known as Operation Project Paperclip. America married Fascism, and these Neo-Nazi and White Supremacist groups of today that have remained permitted to thrive underground for decades are onlu today’s brownshirts of yesterday.

What marks the difference now is the spread of the disease not just confined to Germany or Italy, or Europe, but has become a serious worldwide underground network and epidemic that must be squashed by any means necessary. Fascism will not and cannot listen to reason and be asked kindly to retreat. Only force can subdue this illness into conceding to defeat and total eradication once and for all to make sure that it can never rise again.

Fascism wears a new face today that very different and more dangerous now. It wears the mask of Patriotism and the American flag on its surface, preaching God, Guns, and Government (or anti-government), in the form of the dapper college educated white man, the “educated” and “religious” “intellectual” debating college student, all the while still maintaining its vile underbelly of racism and white supremacy and nationalism underneath the facade. It’s goal, the exclusion and eradication of anyone who is not “like them”, a straight white Christian man or woman. But even straight white women are not safe as it seeks to oppress their freedom and revert to the days before the women’s liberation movement that gave them the right to vote and the freedom to be independent from the husband as an autonomous human. This is most evident the attempts to rule back women’s rights with abortion rights and rape laws. Fascism can never be trusted, no matter how well dressed or patriotic it appears, and it must never be trust least we be damned.

Fascism is not a threat to capitalism. It’s the inevitable end point of it. They are married to each other because Fascism preserves the class structure and the rich. This is why Communism and Socialism and Democracy are seen as threats, because they threaten to disrupt and destroy the class structure that preserves the wealthy.  Anywhere where democracy or egalitarianism seeks to give way to freedom, Fascism seeks to destroy it and replace it will violent oppression at the hand of the state to prop up its ugly head.

Do not be mistaken, Fascism is not your friend. It feeds on your fears and your feelings of lack of safety to grab hold of the unknowing victim and make him a cog of the state to do its dirty dealings, pitting man against man, sibling against sibling, and child against parent. It is the only way it can maintain and grow its control is through this division, which it feeds on and is its greatest tool. It is predicated on entire groups of people not existing and using violence and genocide as a means to its end. It is predicated on hyper Nationalism, and uses religion and division has vehicles for people to see each other as “other” rather than together and unified. “You’re either for us, or you’re against us” is a common phrase you hear in Ultra Nationalist cultures. This is a sure sign of totalitarian rule.

We MUST realize Fascism for the terrible monster it truly is. Like its older siblings of racism and white supremacy, it is a dark evil. And those who fight in its name or support it as sympathizers will be known as traitors to freedom in the memory of history. Make no mistake, you WILL be known to have been on the wrong side of history, and your name will forever be cast into the shadows.

I beg of you, if you heed this call now, and turn back, trust that time will forgive you.

We are NOT each other’s enemy, as much as Fascism and those in power would have you believe. And we must wake up to this. This division is what the disease thrives on. It keeps the people divided so that the control remains in its hands for those in power, while the rest of us sleep and kill each other.

Resistance to Fascism is growing as more information comes forward about what has been going on behind the scenes, and the tides will turn as they have before. We must join and raise the resistance further until Fascism is weeded out of the depths of our culture and collective psyche.

The tide of Fascism will be beat, again, by a people’s movement towards the Freedom of Democracy and the Justice of Socialism that Fascism fears most.

The world demands it if we are to survive current and future crises we are facing, which Fascism has no answer for.

“Fascism is the iron hoop that holds together the collapsing barrel of capitalism.” – Karl Radek

“The climate collapse is breeding eco-fascists at a rapid pace. That’s fine with capitalists. They’ll still get paid. The only solution is a vast redistribution of resources under democratic socialism.”

“Behind every respectable-sounding fascist lies a rage-filled, entitled narcissist who would relish seeing all of us killed or enslaved to maintain white supremacy.” – Hilary Argo